Swiping right or left. Slipping into someone’s DMs. Complete strangers getting married in three months or less on 90 Day Fiancé. Those “coveted” roses handed out from the bachelor or bachelorette who happens to be dating a slew of other people living in the same house (cue the jealousy, tears, and endless debate of who’s there for the “right reasons”).

Considering how much dating has changed because of technology, not to mention the continued popularity of reality TV shows where relationships are fast-tracked toward engagement and marriage, it’s probably not surprising that unrealistic expectations, not to mention a blueprint for dysfunction, are often byproducts of modern love.

Online Dating: The Good, the Bad, and the Ugly

According to Pew Research Center, 30% of adults in the United States have tried a dating website or app. For 12% of Americans, these platforms have led to a committed relationship or marriage — a number that has risen over time.

While an increasingly popular way to meet someone outside of your usual social circle without its earlier stigma of “only the truly desperate meet that way,” online dating has its drawbacks for anyone expecting quick results or a quality connection from a picture and a handful of details provided on a profile.

Given how these forums function as a catalog of sorts, where real-life humans are scrolled through and evaluated like products available on Amazon, people’s self-esteem and body image have inevitably taken a hit in the process.

It’s important to equip yourself with realistic relationship expectations.

A 2016 study revealed that Tinder users, both men and women, had fewer positive feelings about themselves, their faces, and their bodies than people who didn’t use Tinder. Feelings of rejection, unworthiness, depression, and an increase in anxiety were also reported when someone didn’t return the gesture of getting in touch after interest was expressed.

And for 28% of online daters, abuse has become more frequent, according to a Pew Research study. In addition to being subject to nasty messages or unwanted contact following someone’s lack of interest, daters reported being harassed or made to feel uncomfortable by someone on a dating app or site.

The number of unwanted incidents jumps for younger women ages 18 to 34 and those who identify as lesbian, gay, or bisexual, according to an article published in USA Today. More than half of the aforementioned group reported getting a sexually explicit message they did not ask for.

The Real-Life Effects of Reality TV 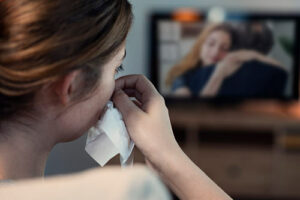 While there’s nothing wrong with a guilty pleasure — in fact, there are scientific claims they are actually good for your brain and dealing with stress — a steady diet of romantic comedies and reality shows focused on finding “the One” can have adverse effects.

While everyone probably wishes, at one point or another, that life was a little more like a Hallmark movie, romantic expectations that aren’t aligned with reality can have some potentially toxic consequences, including staying in a relationship longer than you should, avoiding confrontation because of the belief that he or she is your soulmate, and downplaying problematic behavior.

In a soon-to-be-published study in the Psychology of Popular Media Culture journal, regular viewing of marriage-centric reality shows like The Bachelorette often reinforced the romantic notion of “one perfect partner” and “love at first sight.” For those who watched sitcoms where not-so-perfect relationships were depicted, however, those common tropes were diminished.

For those already in a committed relationship or marriage, a recent survey shared in Women’s Health Magazine indicated that the more someone buys into the television version of a relationship, the more unlikely he or she was to be fully committed to theirs.

Feeling like their relationship was more of a burden or lacking the sizzle of their favorite TV couple, the idea of there being someone “better” out seemed like a real possibility.

While seemingly harmless to some viewers, reality TV has also been linked with body image issues, depression, and even suicidal ideation.

Before the release of Love Island, a popular reality show in the United Kingdom that had a United States spin-off (which is currently postponed production due to COVID-19), a YouGuv survey reported that one in four people between the ages of 18-22 in the UK said that reality TV causes them to worry about body image.

Additionally, more than one in seven — 15 percent — said they deliberately engaged in self-harm because of how they felt about their bodies. Another 23% had experienced suicidal thoughts.

The bottom line is what’s a fun escape for some may be damaging and unhealthy for others. Whether it’s a dating app, the latest matchmaking service online, or watching relationship drama play out on a reality TV show, equipping yourself with realistic relationship expectations is so much healthier — whether you’re single, married, dating, partnered, or somewhere in between.

Hope for the Hurting

If you or someone you care about is struggling with love addiction or intimacy disorders, there is hope at the Willow House. With time-tested treatment and compassionate care, our expert medical and clinical staff helps create a personalized treatment plan to treat addiction, trauma, or mental health issues that are holding you back from the life you want. For more information, please get in touch with our team today.